I first encountered prototypes of this bumper several years ago from Greg Oyer in GA. I used them in my regular training and made a few recommendations to developers. This spring, the Airflow bumper became commercially available in both white and orange. I obtained a set of both colours and began using them in much of my training that involved drills and blinds. This review expands on my field testing and a brief note I made on Facebook in the summer of 2017.

The Airflow bumper is a better mouse trap! While the common "knobby" bumpers typically used for decades are clearly a good product, some models exhibited problems. Some were extremely hard and others had sharp-edged knobs. Some caused dogs to mouth them excessively or commonly carry them by their ends-we call this cigaring! Other dogs got a case of dropsy with them especially in cold weather when they got slippery from frozen saliva. Switching to canvas bumpers didn't always help and furthermore, the canvas bumpers soon turned a dull brown-grey, we lost the advantages of a white or orange bumperand they were less durable..

The Airflow has distinctive ridges (flutes) and a noticeable narrowing in the center along with small knobs at each end. The plastic material is textured and feels soft but not too squeezable. The result is dogs seem to retain a much better grip. I have rarely seen any cigaring although dogs sometimes end up holding them close to the end. In observing ,a variety of dogs I note that many times they just naturally pick up dead center. I suspect the narrower middle area is just naturally a more easy place to grab 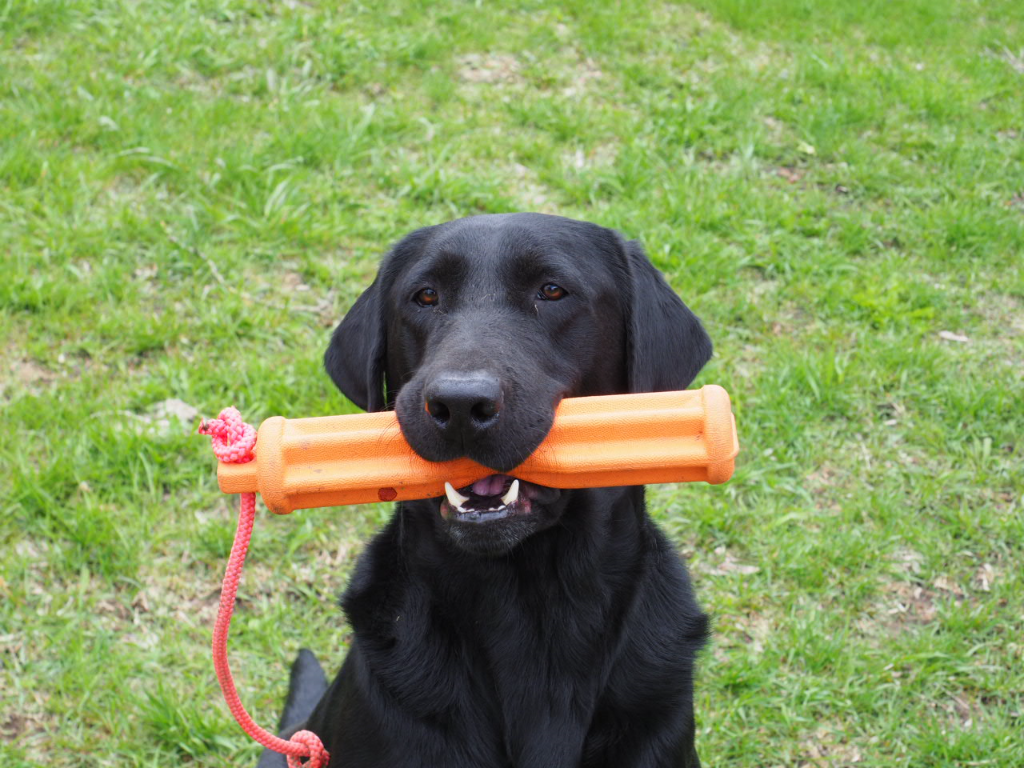 A proper hold seems easier for dogs with the Airflow bumper

The narrower middle section was not primarily designed for that reason but rather for the increased airflow it provides to the dog when running. Chuck Yanke from Airflow Bumper, an engineer and avid hunter, learned about this innovative new training bumper design from the Canine Performance Sciences Center in the School of Veterinary Medicne at Auburn University. Researchers there concluded that traditional training bumpers restricted 93% of the airflow through dogs mouths-almost completely blocking the air.

Auburn University which has a patent on the new design measured a 350% greater air flow with the Airflow compared to a convential bumper. This is something that we can't see and we probably can't design a field test to prove how much it helps. But it's comforting to know it is a function of this bumpers design and it could be a bonus during heavy exertion.

The Airflow Bumper is similar in size to a typical "small" knobby bumper. It is slightly longer counting the rope hole protusion. The diameter is the same but it looks fatter because of the fluted design. Thus, in water it "appears" to float a bit higher but it may also be because the bumper is lighter in weight. Initially, I thought the lighter weight would affect throwing distance and perhaps accuracy. To test that, I placed a dozen bumpers of each type in a pile and threw each a normal distance with my eys closed the entire time. I knew which bumper I had each time but tried to throw exactly the same. When I compared the location of the Airflow bumpers and the knobbies, I found them in a very close area with perhaps some Airflows a foot or two shorter. I don't believe the difference in weight is significant. You may need a little practice throwing with these bumpers because they do feel different initially. I have relatively stiff ropes on nine and I think this aids the throw of the Airflow. 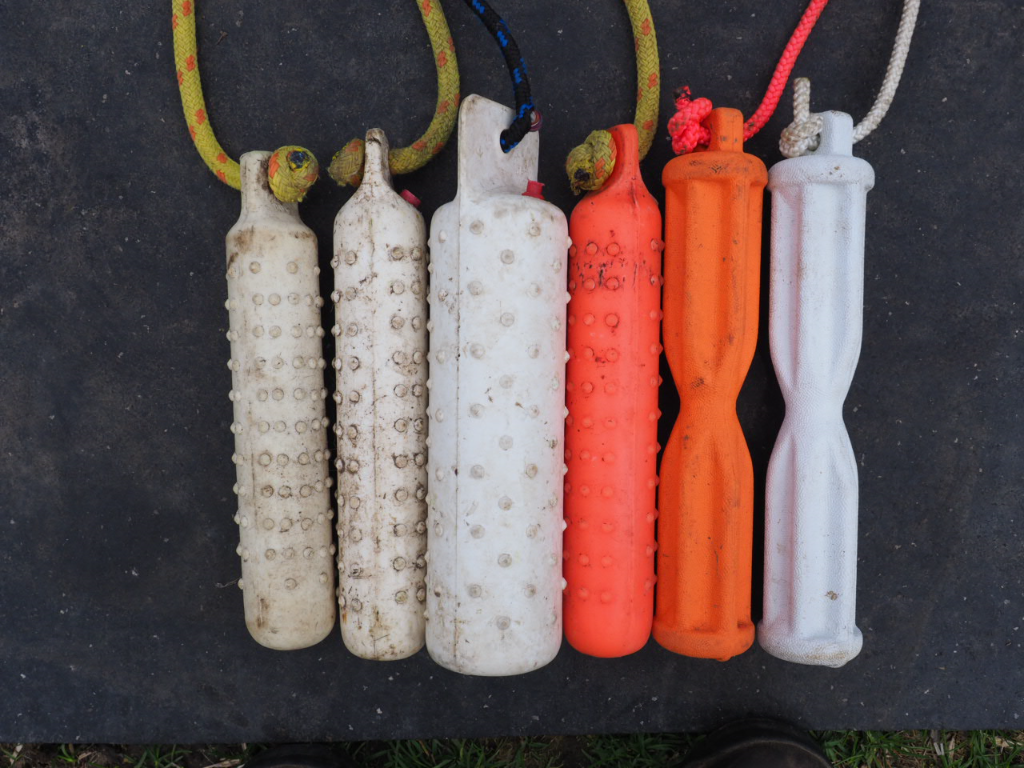 Comparison of Airflow Bumpers (on right) with large and small knobbies.

The plastic that is used in the Airflow has a significant advantage perhaps over all other plastic bumpers. Knobby bumpers (most if not all of which are made in China) are of polyvinyl chloride (PVC) which has 36-72% phthalate(harmful chemicals banned in childrens toys). The Airflow bumpers are made in USA from FDA and EU approved non toxic food grade plastic. When you think of how much our dogs have bumpers in their mouth over the years and while inhaling heavily, this may be a very significant health advantage. Based on my usage, I see no sign of reduced durability and my 3 year old bumpers look new. I see no difffernce in scenting ability from regular knobbies after the bumper have been used a bit and picked up scent. Incidentally, I never scent my bumpers with artificial scent.

Initially when the Airflow bumper became available it was targeted to the wholesale market and indeed distributorships are still available. As the bumper became available for retail for the price of $14USD, a not uncommon comment was  "I like it but too pricey".   I like to have a minmum of 8 white and 8 orange bumpers for various drills which can be a be a major investment.The good news is that starting 1 September 2017, the purchase price has dropped to $11.50USD making it competitive.

You can order at www.airflowbumper.com and some dog supply companies. 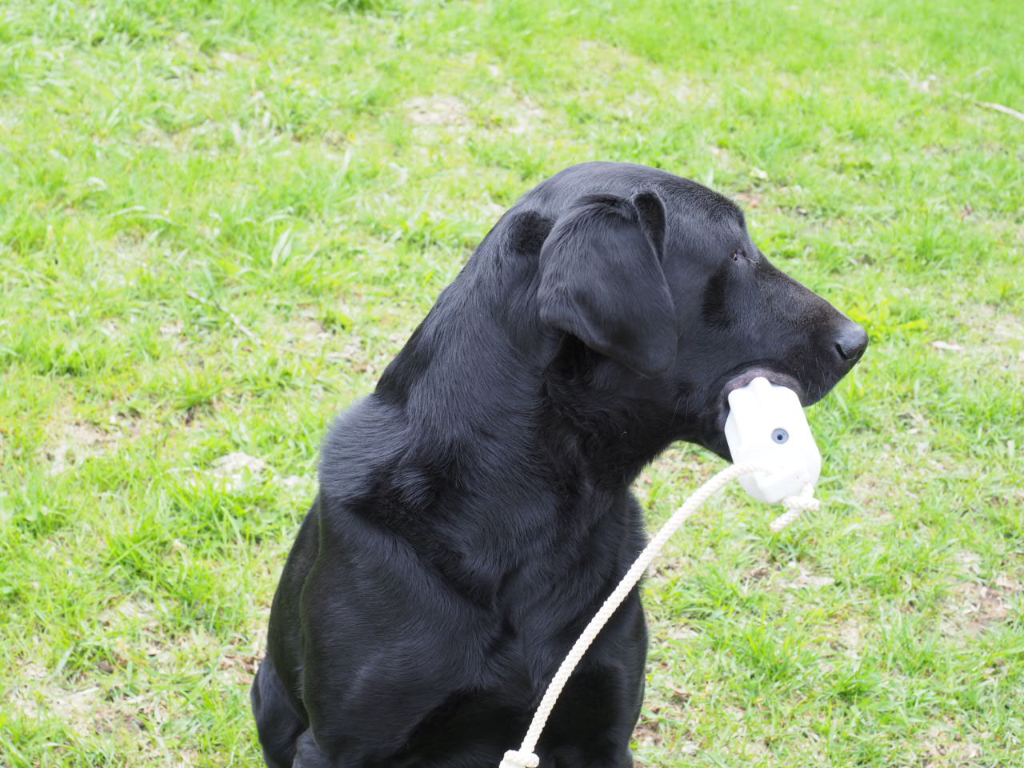